Throughout the history of automobile development, chrysotile asbestos has been an essential component of vehicle brake linings and pads. Acceptable alternatives were not fully developed until the 1980s, and these were installed in vehicles produced over the past decade. This article presents a “state-of-the-art” analysis of what was known over time about the potential environmental and occupational health hazards associated with the presence of chrysotile asbestos in brake linings and pads.

As part of this analysis, the evolution of automobile brakes and brake friction materials, beginning with the early 1900s, is described. Initial concerns regarding exposures to asbestos among workers involved in the manufacture of friction prod- ucts were raised as early as 1930. Between 1930 and 1959, eight studies were conducted for which friction product manufacturing workers were part of the population assessed. These studies provided evidence of asbestosis among highly exposed workers, but provided little information on the magnitude of exposure.

Environmental and occupational health hazards associated with the presence of asbestos in brake linings and pads (1900 to present): A “state-of-the-art” review. 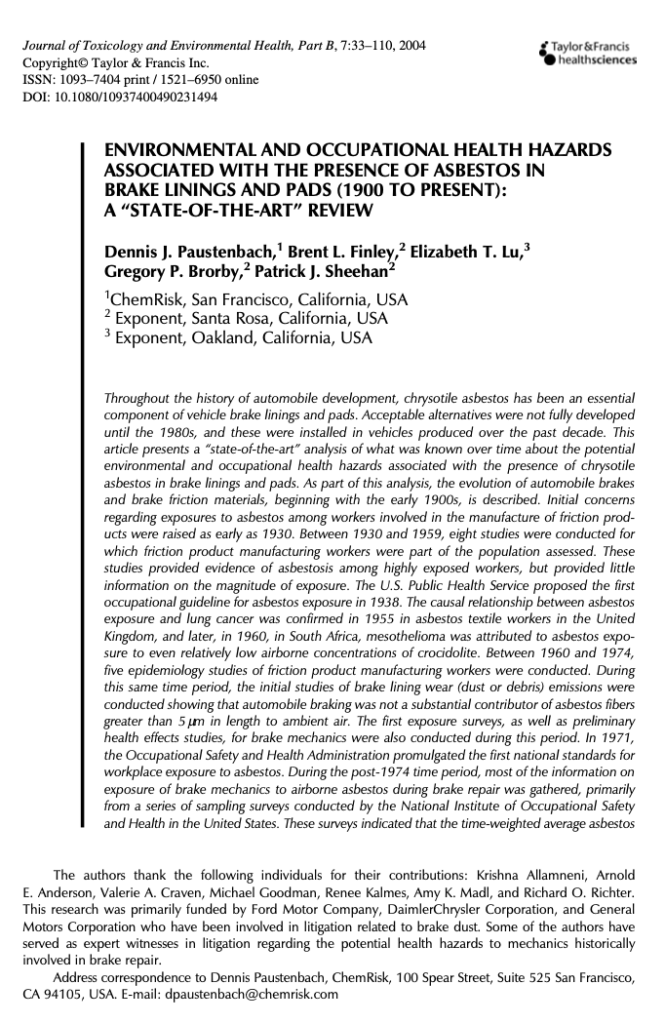 The U.S. Public Health Service proposed the first occupational guideline for asbestos exposure in 1938. The causal relationship between asbestos exposure and lung cancer was confirmed in 1955 in asbestos textile workers in the United Kingdom, and later, in 1960, in South Africa, mesothelioma was attributed to asbestos expo- sure to even relatively low airborne concentrations of crocidolite.

Between 1960 and 1974, five epidemiology studies of friction product manufacturing workers were conducted. During this same time period, the initial studies of brake lining wear (dust or debris) emissions were conducted showing that automobile braking was not a substantial contributor of asbestos fibers greater than 5μm in length to ambient air. The first exposure surveys, as well as preliminary health effects studies, for brake mechanics were also conducted during this period. In 1971, the Occupational Safety and Health Administration promulgated the first national standards for workplace exposure to asbestos. During the post-1974 time period, most of the information on exposure of brake mechanics to airborne asbestos during brake repair was gathered, primarily from a series of sampling surveys conducted by the National Institute of Occupational Safety and Health in the United States. These surveys indicated that the time-weighted average asbestos.